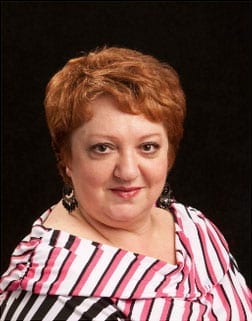 With almost 20 years of experience, Inessa specializes in manicures, pedicures, and Shellac nails.

Originally from the former Soviet Union, Inessa arrived to the United States in 1990, where she settled in St. Louis with her family. While trying to figure out her career, Inessa knew that she wanted to work with people where she could make them feel good. Becoming a manicurist seemed a natural fit for her personality.

She studied at the Patsy and Rob Academy of Beauty and received her manicurist license in 1992, and got her start at Nails Unlimited. Inessa then moved on to LaSpa, and was there until 2002. After LaSpa, Inessa came to Christopher’s, where she has been for almost nine years. When Inessa is not making her clients feel good, she enjoys her grandchildren, a good party (she wouldn’t be a real Russian if she didn’t), and a competitive game of Ping Pong. She is also very proud to be a St. Louisian and an American.

Inessa is available on the following days:
Wednesday 8am – 2pm
Thursday 8am – 8pm
Friday 8am – 6pm
Saturday 8am – 5pm